A recent study, affiliated with UNIST has presented a new class of efficient catalysts, made from inexpensive carbon compounds and ruthenium (Ru). These novel catalysts are stable and display both efficient catalytic activity and improved electrochemical performances.

Published in the July 2020 issue of Nano Energy, this breakthrough has been jointly led by Professors Guntae Kim, Jong-Beom Baek, and Sang Kyu Kwak in the School of Energy and Chemical Engineering at UNIST. In their study, the research team has proposed Ru-based catalysts that exhibit excellent stability regardless of electrolyte pH levels during electrochemical reactions, such as water splitting.

Platinum(Pt)-based catalysts are often found to be less effective in alkaline electrolytes. The proposed catalysts not only work well under both acidic and alkaline conditions, but also in neutral solutions. And thus, it is expected to be applied to the previously reported Zn–CO2 system, which utilizes CO2 as a raw material to generate electrical energy and useable hydrogen fuel. The research team had previously developed this system based on the phenomenon that the ocean contains significantly larger amounts of CO2 dissolved in it. The system is in a neutral aqueous solution, saturated with CO2.

Pure water contains very few ions, and thus it does not conduct electricity. Therefore, adding acids or bases to water increases the concentrationof ions in the solution, thereby causing an electrochemical reaction to take place. Catalysts reduce the energy needed to make a chemical reaction take place. The decreased energy consumption that this causes increases the catalyst efficiency. However, in order to accelerate the commercial use of various electrochemical reactions, such as water electrolysis, there is a need for catalysts that exhibit high catalytic efficiency with high durability. Platinum (Pt) has been widely used in various industries due to its high electrocatalytic activity. Yet at the same time, it is also highly corrosive in alkaline media, thereby resulting in poor durability. 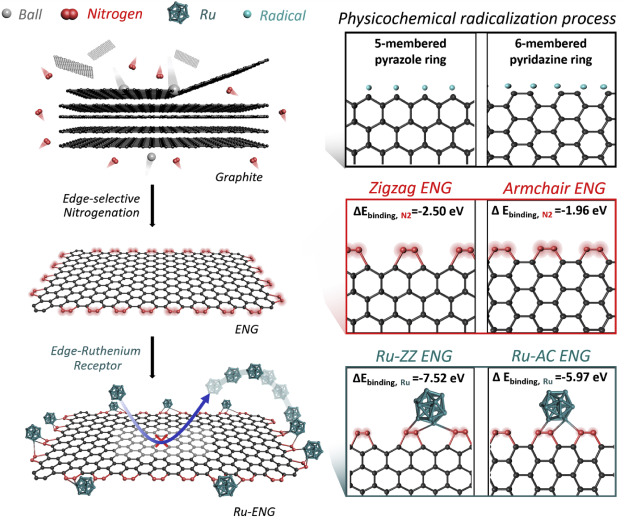 “Our work represents the edge-sites design of graphitic nanoplatelets with Ru nanoparticles for an efficient and stable HER electrocatalyst at universal pH,” says Yejin Yang (Combined MS/Ph.D program of Energy and Chemical Engineering, UNIST), the first author of the study. 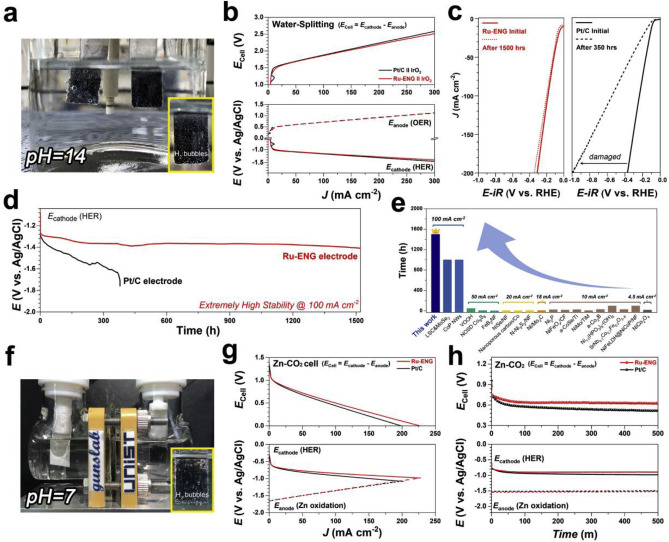 Figure 2. a) Photograph of the water-splitting test. b) I–V profiles of Pt/C and Ru-ENG catalyst during conducting water-splitting. c) Durability test of Pt/C electrode (black) and Ru-ENG electrode (red). The polarization curves were conducted before and after consecutive chronopotentiometry profiles. d) Chronopotentiometric stability profiles of Ru-ENG, and Pt/C electrode at a constant current density of 100 mA cm−2 for 1500 h. e) Comparison of the water splitting stability of various catalysts reported in the literature. f) Photograph of the Zn-CO2 system. g) I–V profiles of Pt/C and Ru-ENG catalyst during operating Zn-CO2 system. h) Chronopotentiometric operating profiles at 10 mA cm−2 in CO2-saturated 1 M KOH.


According to the research team, electrochemical durability is also a vital criterion to asses the property of an electrocatalyst for the practical application. To evaluate the stability of the Ru-ENG catalyst, the research team performed accelerated degradation studies in all pH conditions. Their results show that the proposed Ru-ENG catalyst showed much better electrochemical performance and stability compared to commercial Pt/C in universal pH conditions. Besides, in practical applications with a water-splitting and aqueous Zn–CO2 system, the new catalyst exhibited superior long-term consecutive stability (over 1,500 h) and remarkable hydrogen evolution activities.

“Notably, the current density value of Ru-ENG catalyst for the hydrogen generation efficiency in Aqueous Zn-CO2 system was also higher than that of Pt-based catalyst,” says Jeongwon Kim (Combined MS/Ph.D program of Energy and Chemical Engineering, UNIST), the first co-author of the study.

“This work provides a potentially powerful approach for the design of rationally selective heteroatom substitution with other active metals as a promising HER candidate regardless of pH condition,” says Professor Kim.

The findings of this research have been published in the online version of Nano Energy on July 6, 2020. This study has been supported by the National Research Foundation of Korea (NRF), the Ministry of Science and ICT (MSIT), and the Korea East-West Power Corporation.